Today we offer the"Yoga Bhajan Formation" and " The Sacred Healing Circle" in Agentina, United States and Europe.
If you'd like to participate, or invite us to give a workshop  send us an email: yogabhajan@hotmail.com

A little bit of history...

The word YOGA comes from Sanskrit, one of the oldest languages of all humankind. It means “union”. One of the main purposes in the practice of yoga is to unify Mind, Body and Spirit. Think of it like a three-piece puzzle. And for kids like you, yoga means you get to play!

Yoga means union with the absolute – with mystery; with God; or, as they call it in the ancient Tao Te Ching book, with “the Nameless”. When we are in a state of union with the Universe, without duality, we are in the state of yoga, vibrating oneness.

Babies are all born as yogis, vibrating pure presence and constant union.

Yoga practice began thousands of years ago in the jungle, when the yogis became inspired by the birds, trees, snakes, fish and even the insects. They would imitate what they observed in nature with their own bodies, and in this way the yoga poses, or Asanas, began to take form. The yogis also noticed that when an animal got sick or felt sad, it sat in a different position to help regain its balance. Thus, the ancient yogis created a system of Asanas that helped them keep their bodies strong and flexible. Patánjali was a great Hindu yogi who left a legacy of wisdom from which yoga in its current form has sprung forth and evolved.

Practicing yoga also tones the internal organs, glands and nervous system. Our nervous system is like an electric circuit that runs through our body. When it is stretched out it can support a higher voltage of energy and vibrate at higher frequencies. So just as increasing the thickness of a cable allows more electricity to run through it, a lengthened and toned body allows more energy to flow through us. By maintaining a yoga practice our nervous system becomes strengthened, vibrant and filled with Prana - or vital force, full of oxygen and life.

According to Chinese Medicine, Prana circles throughout our light channels, or meridians. In Hindu Medicine they are called "nadis", and Prana runs through all 72,000 of them. When we practice deep breathing our thirty trillion cells are oxygenated and we are filled with the vital force of Prana.

A yoga class is composed of part action: the Asanas, or poses, and part non-action: relaxation, meditation and silence.
One part gives, one part receives...      Give the best of you and receive Mastery.

We are Spirits living a human experience

On this website we'd like to share with you the history of Yoga Bhajan, photos from our yoga encounters, workshops, community services, our songs and more.
You can also ask us whatever your heart desires, or send us your ideas...

With the Yoga Bhajan Set you will discover a new way to play: draw a card, practice the yoga posture shown on it, then look up the number of your card in the book and read the poem or story, answer the riddles, sing the song while you listen to it in the CD.
There are also a ton of games you can play using the cards, which you'll find in the book under the section "Games to Play". If you are a yoga teacher or you like to play with kids, we've provided material, ideas and suggestions for your classes.

Yoga Bhajan is the result of years of classes with children from many different backgrounds, with our own children and with the inner child present in each one of us...

Yoga Bhajan was created from a place of much love. As quoted on the inside cover, this book "...is like the wings of a butterfly that open to take flight, engaging more intensely with the grace of Oneness."

The idea began in Cosa Rica, while we were at "Vida Asana", a yoga center en Playa Bonita. That's where my sister Rousmery lived, who is also a yoga instructor. Many people from all over the world visit her yoga center to give workshops and for yoga encounters. I began to teach yoga classes with children every week at the center, and soon we had a steady following of a great group of kids. There are some beautiful photos from these moments which are shown in the book. We have many fond memories of the great time we had.

Before Costa Rica we taught yoga classes in Argentina; first in San Martín de los Andes, where we had an equally lovely following of children in weekly classes, and then in Chapadmalal where we taught classes to large groups of children at Rural 24 Elementary School. We also held workshops in Northern Hills in and later in . 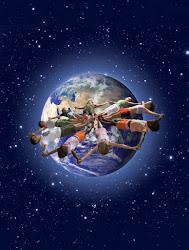